Caitriona and Allen, were married in August 2012. The ceremony was held in St James’s Church in Killorglin with the reception afterwards at the beautiful Dunloe Castle Hotel near the Gap of Dunloe in Co Kerry. Catriona came to me with the idea of having wild flowers incorporating her bridesmaids colours which were red. 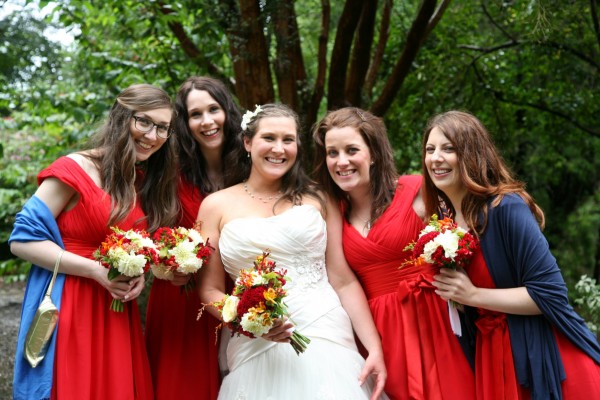 The colours we decided on were rustic burnt oranges, yellow, brown, ivory and reds

The flowers we used were, hypericum berries, montbretia, solidage, dahlias, celosia and some grasses. The style of bouquet was a simple loosely  hand tied bouquet.

Allen’s boutonnière was a simple spray including some of the flowers that were in Catriona’s bouquet.

The arrangements in the church were also wild/garden flowers including hydrangeas and a few dentrobuim orchids. The altar arrangement was then reused at the reception on the top table.

Share on FacebookShare on TwitterShare on Linked InShare by Email

This website uses cookies to improve your experience while you navigate through the website. Out of these, the cookies that are categorized as necessary are stored on your browser as they are essential for the working of basic functionalities of the website. We also use third-party cookies that help us analyze and understand how you use this website. These cookies will be stored in your browser only with your consent. You also have the option to opt-out of these cookies. But opting out of some of these cookies may affect your browsing experience.
Necessary Always Enabled

Any cookies that may not be particularly necessary for the website to function and is used specifically to collect user personal data via analytics, ads, other embedded contents are termed as non-necessary cookies. It is mandatory to procure user consent prior to running these cookies on your website.

SAVE & ACCEPT
Go to Top